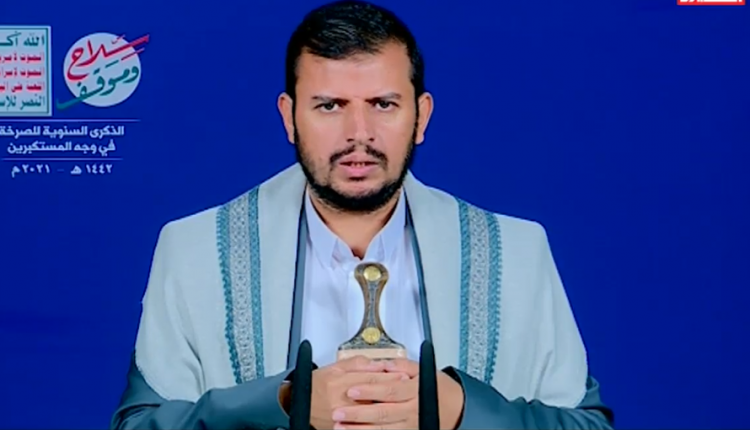 “There are three pivotal points for achieving peace, namely stopping the (aggression)، lifting the siege and ending the (occupation)،” Sayyed Abdulmalik said in his speech on Thursday evening on the occasion of the anniversary of Al-Sarkha (Anssarallah’s slogan).

Leader of Anssarallah added that the (aggression forces) did not make any concessions, and “what we want is to stop the aggression and lift the siege.”

Sayyed Al-Houthi noted that asking Yemeni people to stop confronting the aggression means accepting surrender. “Our people suffer to obtain oil derivatives because the aggression forces want them to suffer.”

“When we defend our country in the face of the aggression and siege that perpetrates the most heinous crimes, they accuse us of implementing the Iranian agenda, and this is an obsolete tone,” he explained.

He pointed out that invoking the Iranian agenda in Yemen, Lebanon and Palestine is Israeli and American logic.

Al-Houthi confirmed the Yemeni people adherence to their right to freedom, independence and dignity, and to the right of the entire nation to be freed from American and Israeli conspiracies.

Sayyed Abdulmalik indicated that the Saudi and Emirati regimes moved frankly and clearly to push the nation toward loyalty to America and Israel, and hostility to the axis of resistance.

“The Saudi and Emirati media appeared in their position on the Palestinian resistance as if they were affiliated with the Israeli enemy,” he said.

The leader of Anssarallah affirmed that the Arab reality, which was affected by the failures at a certain stage, was not positive towards successful models, the forefront of which was the Lebanese resistance.

He explained that what has hindered the Israeli enemy from expanding to the rest of the countries is the Palestinian resistance, and before that the Lebanese resistance.

“We must look to Hezbollah and the Palestinian resistance as successful models, even though they did not enjoy Arab and Islamic support except from the Islamic Republic of Iran and Syria,” he added.