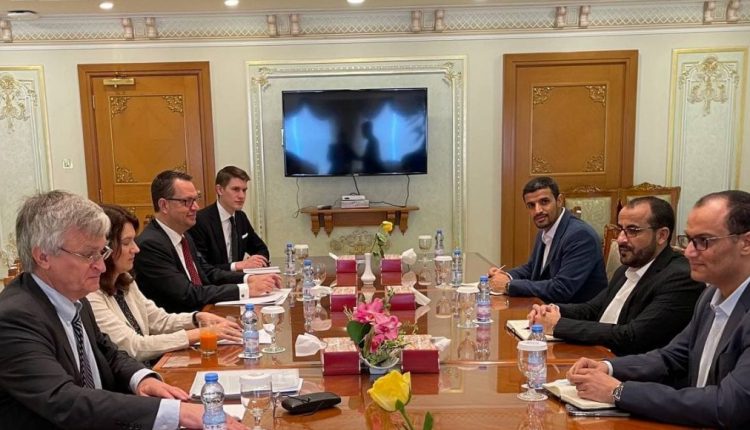 
The head of Sana’a government National Delegation, Mohammed Abdulsalam, met on Wednesday with the Swedish Minister of Foreign Affairs, Ann Linde, in the Omani capital, Muscat.

Abdulsalam said on his Twitter: “During the meeting, we emphasized that the unjust siege on Yemen violates international humanitarian laws.”

Abdulsalam welcomed any efforts to lift the siege and pave the way for reaching comprehensive ceasefire negotiations.

In turn, Ministry of Foreign Affairs of Sweden, said in series of tweets on Twitters she talked about humanitarian situation, ceasefire, political process.

Parties should engage with UN without preconditions for ending the war, Linde affirmed.

About her visit to the UN-supported “A Profession in My Hand in Mukalla, Linda said, “These projects provide livelihood opportunities for many women, and that international supporters of Yemen should find sustainable solutions, invest in human development and enhance the role of women in the Yemeni political process.

Linde described Yemen as a beautiful country, saying that this is her second visit in the midst of the humanitarian crisis that the country is going through as a result of the war. She added: I am pleased to meet with the Yemenis to discuss the ongoing peace efforts led by the United Nations, noting the strong support provided by Sweden and the European Union to Yemen.

The Swedish Foreign Minister expressed her happiness to meet with Omani Foreign Minister Badr Al-Busaidi, to discuss the Omani mediation efforts in Yemen and ways to enhance regional dialogue.