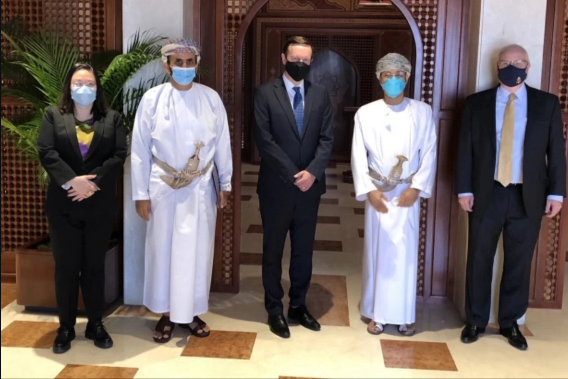 
Press and diplomatic sources revealed, on Tuesday, complications facing the course of indirect negotiations between Sana’a and US-Saudi parties, with the participation of the United Nations. It would thwart the current movement to push for a political settlement

The Omani researcher in international affairs, Salem bin Hamad Al-Jhouri revealed on what he described as regional and international efforts to push towards a breach for the crisis wall. He pointed to the request of Sana’a delegation, for international guarantees in case if it engages in the political process, this indicates that Sana’a has been under war and siege for seven years, doubting on the new US-Saudi moves, especially in light of the negotiations focus over Marib, whose forces have come close to control it.

The American envoy to Yemen, Tim Lenderking, arrived with the Saudi Foreign Minister and the UN envoy to Yemen Martin Griffiths earlier on Sunday to the Omani capital with a new initiative that includes stopping the progress in Marib in exchange for lifting the siege on Hodeida, which preceded Sanaa’s refusal as it links the humanitarian file to Political and military issues.

In the context, media affiliated with coalition circulated statements attributed to a Western diplomatic source talked about Saudi Arabia’s rejection to new conditions related to a three-stage ceasefire, beginning with the cessation of air strikes, followed by the ceasefire stabilization   on the borders before starting to stop the confrontations on the internal fronts. These conditions are added to an escalation on the ground, indicating that the current round of attempts to pass an agreement to freeze the war in Marib is on its way to failure.