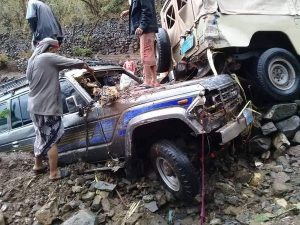 
Several provinces have witnessed heavy rains and torrential torrents during the past two days in different parts of Yemen.

Citizens documented dozens of photographs for the torrential rains in the province during the past hours of Friday.

Documented photographs show the magnitude of the torrential rains in the village of Al-Sarm in the Directorate of Al-Masrakh, where rising water levels have washed away many cars.

The photos reflect the extent of the destruction caused by the floods, without knowing the number of victims until the moment.

In Hadramout province, Torrential rain swept away a fuel truck and a number of cars local sources said.

The sources said that the torrential rain swept away a truck loaded with fuel and a number of cars in al-Ayin valley, in addition to residential buildings and no casualties were recorded.

The Weather Forecast and Early Warning Unit of Hadramout province warned of heavy rain during the next two days.

In a statement, the unit warned all citizens not to risk crossing valleys and torrential branch corridors.