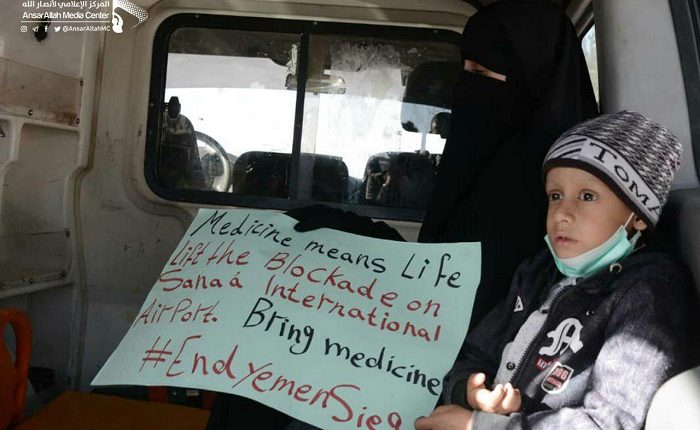 
The UN humanitarian report published on Sunday, referred to the suffering and famine of Yemen as a result of the ongoing Saudi-led war for the seventh year.

The report said that food insecurity and malnutrition are the key factors behind the number of people in need. 16.2 million people will go hungry this year, including 5 million are just one step away from being declared a ‘famine’, including nearly 50,000 thousand people have already faced famine-like conditions in the first half of 2021.

In confirmation of this, the report touched on what was stated by a United Nations organization, that at least one child dies every ten minutes of malnutrition and diarrhea – roughly 2.25 million children under five– are enduring acute malnutrition this year. Over and above, more than a million cases of pregnant and lactating women suffer from acute malnutrition in 2021

In this regard, the report quoted a statement by Mohammed Zulqarnain, Islamic Relief’s Country Director in Yemen, who said: “The country is at a brink of famine. Two-thirds of all Yemenis are Hungry, and nearly half do not know when they will next eat”. He continued: “The human-made crisis is literally deepening in Yemen. A poignant story in which a family had to sell the medications received as a humanitarian aid to afford food for their children instead.

Severe hunger therefore has become a daily reality of Children below five to have become the first victims-facing the specter of death at such an early age”.

With no stability across the country, Yemen’s children and their families will continue to plunge deeper into hunger and malnutrition unless there is a swift action even more necessary, particularly on the economy, humanitarian funding and humanitarian access to stave off the risk of famine.

2.7million people – out of a population of – displaced in 2016, since then the number of IDPs has been scaling up to over four million due to the protracted conflict.

The report added that 2507 schools destroyed and damaged, which left two million children out of school in Yemen.

New Batch of US Marines Arrive to Al-Mahrah

How the Houthis Outwitted and Out-Fought Everyone