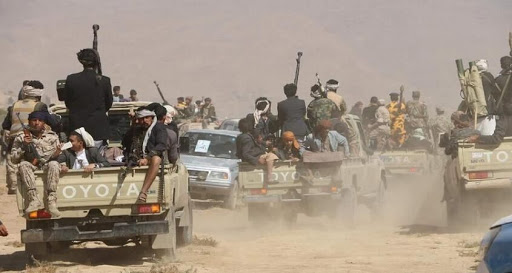 
Giants Brigades forces (Almaliqa), which are affiliated with the UAE, withdrew suddenly from the battle fronts at the western entrance to the Marib city, Tribal sources said.

The sources reported that the groups sent by Hamdi Shukri, deputy captain of the Brigades, withdrew from the fronts of al-Mashajah and Sirwah.

This coincides with an attack launched by the Sana’a army and Popular Committees (Houthis’ fighters) on positions coalition- sponsored forces there.

The real reasons for the withdrawal of these factions were not yet officially known, but the withdrawal comes a day after mercenary commander Tariq Saleh accused Hadi’s forces of refusing to allow him to participate in the battles of Marib.

Other sources pointed out that the Giants Brigade factions have recently escalated their differences with the Islah Party (the Yemeni branch of Muslim Brotherhood), after the bombing of their camps in the outskirts of the city by Saudi-led coalition warplanes, and cite this as a possible reason for the Brigades’ withdrawal from the defense of the Saudi-held city.

On Sunday, Marib witnessed widespread looting by tribal troops in light of the chaos that prevailed the city as Sana’a forces approaching its entrances and fleeing of many commanders of the military units loyal to Saudi-led coalition.

Tribal gunmen led by Brigadier General Abdulkhaleq Bahibah, commander of the special battalion in “143rd Brigade”, looted a number of weapons stores belonging to the so-called “Al-Hasm Brigade” in the city of Marib.

The sources pointed out that the so-called “Special Forces” and “Military Police” of the coalition forces were unable to prevent looting in the coalition camps in the city.