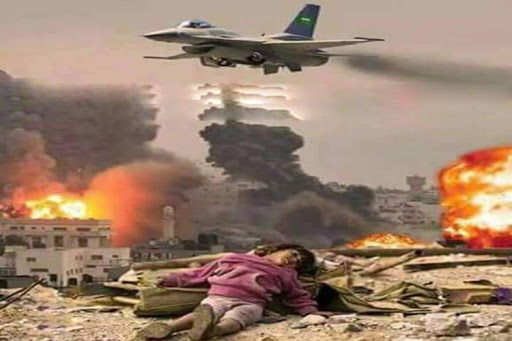 Shocking Numbers on Conclusion of Six Years of War on Yemen


Yemeni Human rights ministry released in a press conference in Sana’a, its sixth official report around the war of the Saudi coalition on Yemen.

The Ministry confirmed that the coalition war deliberately starved civilians, explaining that 16.2 million people suffer from food insecurity, and the coalition war deprived more than 1.25 million employees of their salaries, while the poverty rate rose to 85% and the unemployment rate to more than 65%.

The ministry’s approximation indicated that the coalition launched tens of thousands of military attacks that led to the killing and wounding of 43,582 citizens, including 7,999 children and 5,184 women, explaining that the coalition caused the displacement of four million and 509 thousand and 328 citizens.

With regard of targeting commercial facilities, factories, production and agriculture, the ministry explained that Saudi coalition targeted 13,742 fields, warehouses and agricultural sites, noting that 441,605 livestock and more than 30 Arab horses were killed and 41,610 beehives were burned due to coalition aircraft bombing.

It noted that coalition destroyed 2,409 financial facilities, burned 4,718 fish landing centers, with its contents, and deprived more than 40,000 fishermen from the fishing profession.

It pointed out that the coalition destroyed 349 production factories and 5 silos, as well as 539 facilities and an electricity network, killing 383 workers there, as well as 2,072 facilities and communications networks, killing 69 employees, and destroying more than 679 supermarkets, 11,154 shops.

The coalition destroyed more than 47 media institutions and more than 28 radio transmission centers, cloned satellite channels, closed and stopped Yemeni channels, and killed media professionals and journalists with their families by bombing their homes and while they were carrying out their work.

The ministry report indicated that the coalition destroyed 49 judicial facilities, targeted 48 homes of judges and judicial employees, and killed 18 judges and 40 administrative employees.

The coalition bombing resulted in the destruction of 132 sports facilities, 4,370 roads and bridges, as well as 2034 public facilities for citizens’ services, and destroyed 11 branches of Social Welfare Fund.

The ministry indicated that the coalition destroyed 1,348 mosques, prevented Yemenis to perform Hajj, and its forces bombed a number of religious monuments, as well as 417 archaeological sites and historical monuments, and destroyed 366 tourist facilities.

The Ministry of Human Rights confirmed that Saudi coalition used high-explosive cluster and vacuum bombs with chemical and toxic materials, amounting to more than 3,179 bombs that killed thousands in 11 provinces.

It noted that the coalition violated the rights of more than 8,100 prisoners with various forms of psychological and physical torture.

Hodeida Port Received Only 8% of Actual Need of Oil Derivatives