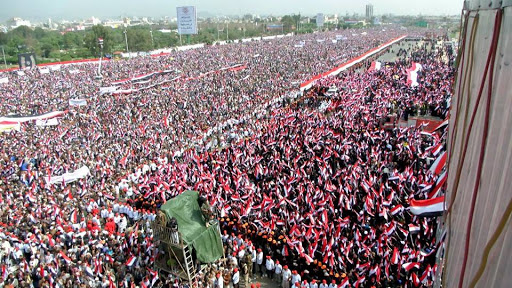 Mass Rallies on Occasion of National Day of Resilience Throughout Yemen


The mass crowds continued on Friday afternoon to flock to the squares of celebration of the National Day of Resilience in the capital, Sanaa, and the provinces.

A number of Yemeni provinces witnessed on Friday mass rallies marking the National Day of Resilience, and the passage of six years of steadfastness in confronting the Saudi-led coalition war on Yemen that started at dawn on March 26, 2015.

In the capital Sanaa, hundreds of citizens from the capital’s districts flocked to the airport road square carrying the banners and signs and chanting slogans confirming the continuation of the steadfastness in the seventh year in the face of the Saudi-led war on Yemen.

The statements, issued by the participants in those mass rallies, stressed the need to continue the military response to the coalition countries in depth until the war is stopped and the siege on Yemen is lifted completely.