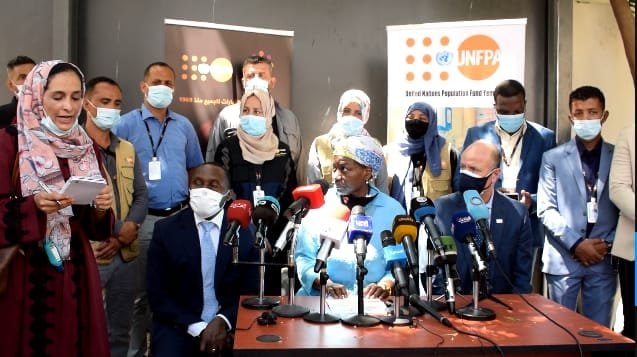 
A UN official visited a number of health facilities in Aden, in conjunction with the declaration of Hadi government a state of health emergency, because of what it considered the outbreak of “Corona” epidemic, in a move that fails the efforts of parties in the legitimacy to manipulate the epidemic in the interest of a political agenda.

Under-Secretary-General of UN and the executive director of Population Fund, Natalia Kanem, held a press conference without a muzzle and focused on the humanitarian situation in Yemen, and efforts to support women in facing violence against them, ignoring completely “Corona”.

The visit came hours after Health Minister in Hadi’s government announced the state of emergency in Aden and the southern and eastern provinces that have been witnessing unrest against Hadi’s government for days, due to what he said, an outbreak of Corona epidemic, despite his ministry’s announcement of recording 91 cases, the largest of which was in Aden, where nearly 34 cases were recorded.

Minister of Health in Aden’s government, Qassem Bheeig, announced the oxygen depletion and called on health and international organizations to support his government in Aden, even though the infection rate recorded in Yemen and officially announced since the start of the pandemic a year ago did not exceed 3,000 cases only, and more than 1500 of them were cured and hundreds died.

The goals of Hadi government were not clear at this time from raising concerns about the epidemic and whether it was an attempt to confront the escalated situation by protests that led to storm its headquarters in the parliament or to achieve material gains under the cover of aid, but the size of the declared casualties and the exaggeration of the situation indicates that there are other motives than facing the epidemic behind Talking about.