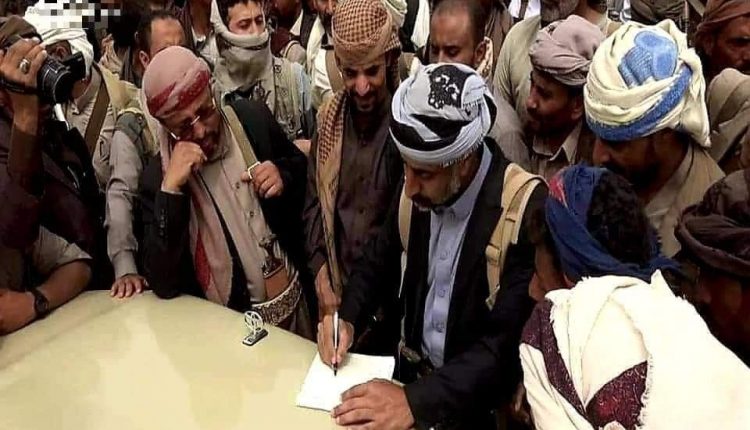 
The Sana’a Presidency released declassified Marib agreement items, which was agreed upon between Sana’a and Marib tribes a year ago, and the Saudi-Emirati alliance have thwarted.

A member of Supreme Political Council in Sana’a, Muhammad Ali Al-Houthi, revealed the nine points that the other side rejected and would have prevented a new battle over Marib, if the Saudi coalition was not intervene and put pressure on Marib tribes and authority to reject it.

1- A ceasefire on all fronts, including Marib province, with the commitment that the areas of the other side in Marib or elsewhere should not be a starting point for any threat or military action against Sana’a party.

2- Releasing on Samira Marsh and return her to her children.

3- Opening a unified account for all oil and gas and port revenues throughout the Republic, and implementing a joint mechanism – within 15 days on the approval on this agreement – to control these revenues to ensure that they are allocated to the payment of salaries throughout the republic, and not to use it by any party, enforce the quotas allocated for the provinces of oil, gas and diesel, in accordance with the law and without tampering or derogation.

4- Not to prejudice the security of citizens, elites, and families in Marib, and stop any harassment that may affects them because of their political or sectarian affiliation.

5- Respect the right of Yemeni citizen from any province to use the public road, and stop all forms of blocking or harassment to any citizen on Marib roads for reasons related to region, political or sectarian affiliation.

6- Release on citizens belong to Sana’a party and compensate those affected and return the displaced safely.

7- Commitment to cooperate in opposing Al-Qaeda and ISIS, and to close any headquarters or camps in Marib that haven any of their elements.

8- Begin to repair Marib gas network and reconnecting to Sana’a.

9- Begin the repair of oil pumps and pipelines and re-pumping oil from Safer to Ras Issa.

Sana’a Reveals on US’s Vision Regarding Solution in Yemen