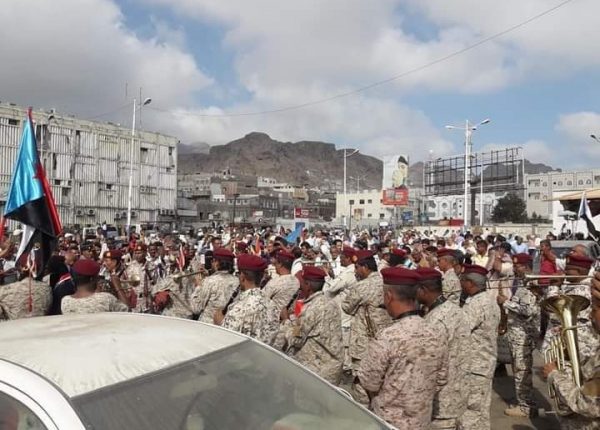 During protest rallies, organized by hundreds of citizens, led to storming the presidential Masheeq palace, the headquarters of the Saudi-backed Hadi government, in the city.

The demonstration began this morning in the Bank Square in Crater, and then the demonstrators set off to Maasheeq Palace.

The protestors are demanding an end to the collapse of the local currency, the interruption of salaries, and the deterioration of services.

In the same context, media sources reported that security forces surrounded the home of the Minister of Interior in the Hadi’s government in Aden.

Eyewitnesses confirmed that the Saudi troops assigned to guard the palace gate fired shots in the air in an attempt to prevent the storming of the palace.

Angry military and civilian demonstrators stormed the government headquarters after they called on it during the last months to improve living conditions, paying salaries, and providing basic services such as electricity and health in the city.

Several commanders of the UAE-backed Southern Transitional Council (STC) participated in protest rallies that broke out in southern city of Aden.

Activists on social media circulated pictures of the leader of the so-called “support brigades”, Mohsen Al-Wali, loyal the STC, wearing civilian clothes, while he was rallying with angry demonstrators as a result of the economic deterioration and the rise of food price.

The southern provinces suffer from an unprecedented collapse of the riyal, as it continued to decline to reach 915 riyals against a single dollar, as a result of the policies of Saudi-led aggression countries and their mercenaries who continued to print banknotes without monetary cover, which has harmed the livelihood of citizens.