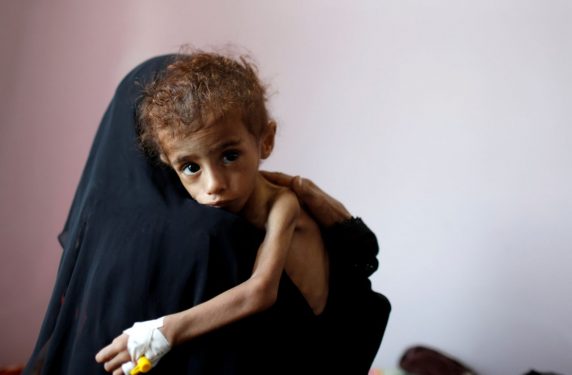 
A Yemeni child dies every 75 seconds as the repercussions of the war in Yemen, which is now experiencing “the biggest famine in modern history,” are worsening, according to the UN Food and Agriculture Organization (FAO).

David Beasley, executive director of the World Food Programme, was quoted by The Telegraph newspaper as describing the situation in the country for Yemen after a visit this week as “hell on earth.”

“I was in Yemen just two days ago, where more than 16 million people are facing a hunger crisis or worse,” Beasley told the UN Security Council on Thursday.

The data he provided were not just figures, but about people heading directly towards the greatest famine in modern history.

He warned that 400,000 Yemeni children could die this year, or nearly one every 75 seconds, if there is no urgent intervention.

“As we sit here, a child dies every minute and a quarter, asking, “Are we going to turn our backs on them and look in the opposite direction?”

The newspaper pointed out that the remarks of the UN official come at a time when Britain has drastically reduced its assistance to Yemen, which was devastated by years of civil war.

British Ministers justified this by saying that the Coronavirus pandemic had created a difficult financial situation for all.

UN Secretary-General António Guterres has warned Yemenis of a “death sentence” after an international donor conference raised less than half of what the war-ravaged country needs to avoid famine.

Nearly a third of families in Yemen are malnourished and rarely consume foods such as pulses, vegetables, fruits, dairy products or meat, according to the World Food Program.

Beasley said he witnessed a deadly silence in the children’s hospital’s wards, where during his recent visit he witnessed the deteriorating health of the children to the point where they were unable to laugh or cry.

The conflict between the Saudi-backed government and “Houthis” has killed more than 100,000 people and left 2.3 million children malnourished.

The new US administration is seeking to bring the war back to the middle of the Arabian Peninsula, especially after it ended its support for the Saudi-led military coalition in the country since 2015 in support of the recognized government.