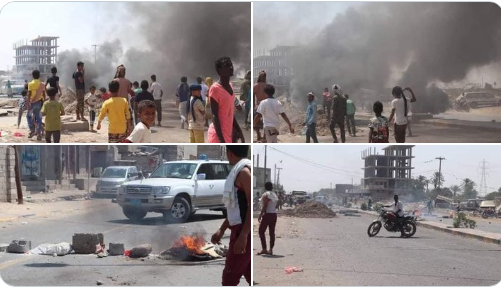 
Protests have escalated in the “legitimate” areas of southern and eastern Yemen over the past few days, amid an unprecedented geographical expansion and a high ceiling of demands, is it a natural result of the living situation, the increasing deterioration in services and the economic collapse, or is it within the framework of arrangements of some kind that pave the way for imposing a new reality in light of the developments taking place in the northern regions?

So far, many observers have been confused about the goal of those protests, which suddenly surfaced and warns of a large explosion, their threads intertwined and their dimensions complicated, placing the strategic region that is witnessing a regional conflict on the edge of the abyss.

Actually, according to the slogans raised by simple people who live a real nightmare, what is going on is a natural reversal to currency collapse which has reached during the past hours the threshold of 920 riyals per dollar, taking food prices to their peak, and power cuts coupled with cutting off the supply, and before that, salaries, lack of water and sanitation services and a long list of infrastructure and basic services, in the underground, however, there are key drivers pushing toward the height of the violence so, who is behind the new situation in the south?

The UAE backed transitional council, which these  troubled regions are under its authority, does not conceal his standing behind the protests, and its most prominent leaders has appeared in the field, Abu Hammam al-Yafei, appeared prior to the start of recent protests, inciting to storm Hadi’s government headquarters and coalition headquarters in Aden, in response to Saudi pressure to remove him from the scene, members are currently clashing with other factions in STC to prevent the suppression of their protest activities, they fired tank shells during Tuesday evening as a threat to the security belt whose trying to please the Saudi leaders.

These developments reflect a split in the ranks of the transitional, which suffers from a regional composition that threatens its entity. The protests began to draw a broad current in the transitional council towards it to impose a new reality that emerged with the demands to form a southern government, control the resources of southern provinces and expel Hadi’s government; these demands are no longer limited to activists and leaders of the middle row. Rather, they reached their culmination during the past hours with statements by the Transitional Vice President Hani Bin Buraik, residing in Abu Dhabi, who declared that the Riyadh agreement was not the final solution for the south, but rather a stage for things to go through, in preparation for declaring the South state within the 1990 borders, it was a sign interpreted as an announcement to abandon Riyadh Agreement formally, in light of the conflict with Maeen Abdulmalik Saeed  government over the revenue, and the near fall of Marib, the last stronghold of the other legitimate forces participating in the new government, this reality now appears to be an urgent desire of Emiratis amid the pressures that is exposed to with its opponents such as Qatar and Turkey entering the crisis line in Yemen and demanding part of the gains that Abu Dhabi is trying to keep, which makes UAE presence impossible in the future unless these areas under the control of its factions witness a new reality that alters the map of the situation completely, and it is pushing towards negotiations in which the factions loyal to it, which are currently marginalized, will be a major party.

Saudi Arabia Pushes up for New Alliance with Qatar in Yemen