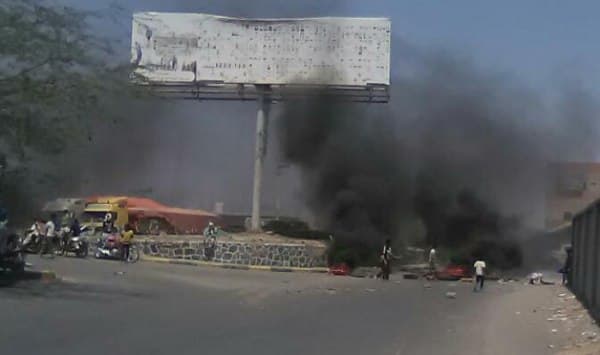 
Hundreds of people took to the streets of Lahj and Abyan provinces, south of Yemen, on Tuesday to protest against the deterioration of living conditions.

At a protest rally, the protesters set up fires in tyres in the main streets of city of Al-Houta of Lahj, calling for the governor, Ahmed Turki, appointed by Hadi’s government, to leave due to the collapse of basic services, including electricity service.

On the other hand, hundreds of citizens in Abyan province demonstrated in front of the headquarters of the governor, Abu Bakr Hussein, demanding his expulsion from the office due to his utter failure in managing the province, amid accusations of depleting resources to the Islah party.

The protesters raised banners denouncing the deterioration of living conditions due to the collapse of illegal currency against the foreign currencies and rising food prices, as a result of the lack of oil derivatives.

In the two rallies, the participants accused Lahj and Abyan leaderships belonging to the Islah Party of failing to control the economic and security conditions and improve the essential services.

SEE MORE: Widespread Protests in Aden over Deterioration of Services