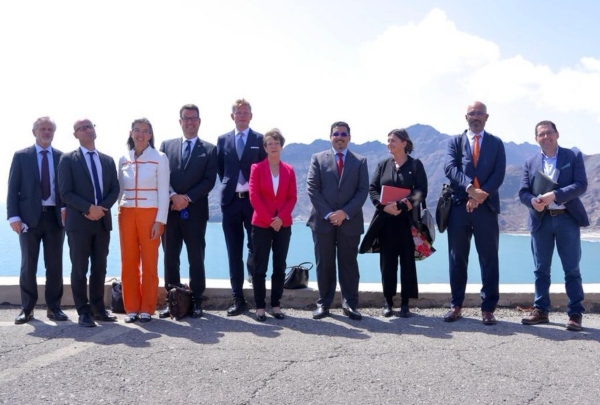 This comes with the announcement of Hadi government intention to resume operating foreign oil companies in Yemen, amid an intense struggle between the legitimate parties to control the oil crescent.

Sources in Hadi’s government revealed the success of the delegation, which includes the European Union ambassador and the ambassadors of France, Netherlands, Belgium, Sweden, Germany, Ireland, Finland and Norway, to persuade Hadi government to allow European companies operating in oil sectors in Hadhramaut, Shabwah and Marib to resume work and grant them facilities in exchange for their support.

The sources indicated that France, which owns a large stake in Shabwa Liquefied Gas Company, agreed with Maeen Abdulmalik, to postpone the payment of debts owed to France in exchange for allowing Total to work under the authority of Hadi’s government.

The Western delegation is trying, through its visit at this time, to preserve the interests of their countries, which acquire most of the oil and gas companies in the oil crescent of Yemen, in exchange for granting Maeen ‘s government political support through recognizing it.

In addition to discuss “common interests” according to what was reported by Hadi-affiliated Saba Agency, according to observers, the visit bore other dimensions, the first of which is its timing comes in light of the conflict escalation between the “legitimate” parties in southern and eastern of Yemen, especially in light of Islah party pressure to declare Hadhramaut territory and its mobilization from Turkey at the outskirts of Lahij to storm Aden, and the second is that it comes a day after the transitional council announced the end of his visit to Russia, the arch-opponent of Europeans, which means supporting Hadi government, in order to withdraw the rug of the conflicting parties within the legitimacy such as the Transitional Council and Islah party.