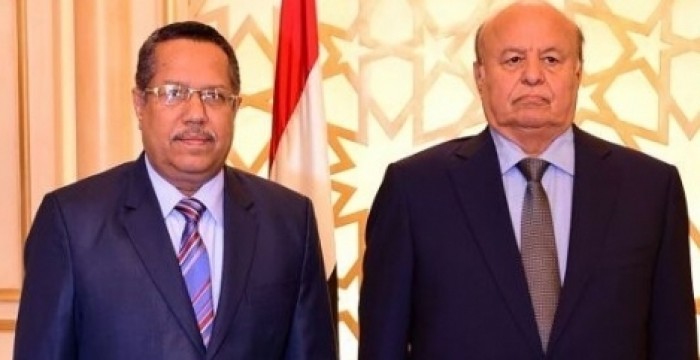 Exiled president, Abd Rabbuh Mansur Hadi, continued to intensify his provocative moves against for the pro-Emirati forces in Yemen, amid calls from his allies in the so-called “legitimacy” to attack them militarily, which indicates that Hadi is pushing to break the influence of Abu Dhabi followers in south of Yemen.

Earlier, Hadi held a swearing-in ceremony for the new head and deputies of Shura Council, led by Ahmed Obaid bin Dagher, promising to take care of the council and give it full care.

In his step, Hadi ignored the warnings issued by his opponents in the “legitimacy” backed by Emirates, on top of which the transitional council and Emirates wing, led by Sultan al-Barakani, along with Nasiri and the Socialist party from the repercussions of what they described, as “unilateral steps” that contradict with Riyadh agreement and even with the Yemeni law and constitution.

although Hadi’s goal in appointing a head of Shura council, affiliated to him and known for his opposition to UAE, pulled the rug of Abu Dhabi by reducing the influence of the parliament that expected to make him return to Aden, however, diplomatic sources reported that Hadi was prepared to issue a new batch of decisions targeting STC side, including the appointment of Ahmed al-Maysari, the former foreign minister, in a high position and return him to Aden after STC refused to make him remain in the position as he is one of August war symbols in Aden last year.

According to sources, Hadi will work in the coming days to provoke STC to push him to take steps towards the Riyadh agreement in a way that allows Hadi and his factions to blow up the military situation towards Aden.

In the context, the head of Islah branch in Hadhramaut valley, which is close to Turkey and Qatar, Salah Batees, called on Hadi to settle matters militarily in Aden.

In his tweet on his official site, indicated that the situation is completely prepared, in light of what he described as the exhaustion of their enemies in the Transitional Council, referring to the disputes raging within the Council due to the Saudi-Emirati polarizations and regional differences.

Batees call came in conjunction with another call issued by the Vice head of Southern National Coalition, Muhammad al-Sulaymani, demanding that to resolve the  situation militarily, in light of the transitional refusal to implement the military part of Riyadh Agreement and its attempts to obtain political gains for nothing.

These statements indicate to a deliberate intention on the part of Hadi coalition parties, regarding to “legitimacy”, on top of which Islah party, and the Southern National Coalition, headed by the deputy director of Hadi’s office for economic affairs, to blow up the situation or push the transitional to do so.

Tens of raids on three provinces within 48 hours

Enormous rally  in Marib against US terrorism on Yemen