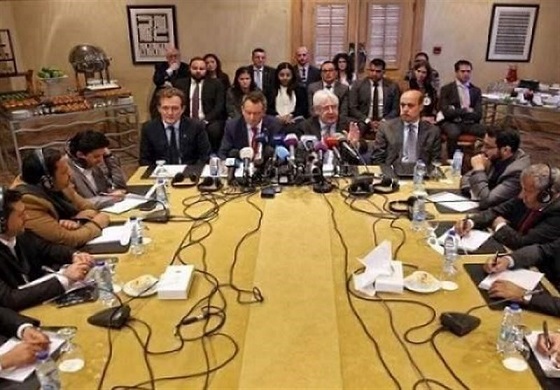 Twenty-two aid groups working on Yemen Sunday called for the designation of Houthis as a terrorist organization to be “revoked immediately,” warning about “potentially catastrophic humanitarian impact.”

The UN Envoy to Yemen, Martin Griffiths urged the Yemeni conflicts parties to release all prisoners, sick and wounded detainees, the elderly, children, and all detained civilians, including women.

Griffiths urged the gathering in Amman to prioritize “the immediate and unconditional release of all sick, wounded, elderly and children detainees as well as all arbitrarily detained civilians, including women.”

He called on the two parties to discuss and agree on the names beyond the Amman meeting lists, in fulfillment of their obligations under the Stockholm Agreement, which provides for the release of all prisoners and detainees in connection with the war as soon as possible.

The fifth meeting of the supervisory committee concerned with following up the implementation of the captive and detainee exchange agreement began Sunday in the Jordanian capital, Amman.

The committee will resume the discussions between the two negotiating parties in Yemen to consider releasing additional numbers of war prisoners and detainees after the release of 1,065 captives and detainees last October.

It is noteworthy that the Supervisory Committee brings together the two parties to the negotiations in Yemen and is headed by the Office of the Special Envoy of the UN Secretary-General to Yemen and the International Committee of the Red Cross.

The talks in Amman are facilitated by the U.N. and the International Committee of the Red Cross, Griffiths’ office said.

The meeting in Amman came after the U.S. declared the Houthis a “foreign terrorist organization,” a designation that took effect Jan. 19, a day before Joe Biden was inaugurated president.

The U.S. move prompted the U.N. secretary-general and other humanitarian officials to urge Washington to reverse the designation to prevent massive famine and death in Yemen.

Twenty-two aid groups working on Yemen Sunday called for the designation of Houthis as a terrorist organization to be “revoked immediately,” warning about “potentially catastrophic humanitarian impact.”

The groups, including Norwegian Refugee Council, Oxfam, Save the Children and CARE International, argued that the humanitarian exemptions the U.S. has made will not shield the war-torn Yemen from “another major economic shock at a time when people are struggling to make ends meet.”

They warned about possible “delays and uncertainty” that would hinder their operations in Yemen, particularly in areas held by the Houthis, where most of the people in need live.

“Any disruption to lifesaving aid operations and commercial imports of food, fuel, medicine and other essential goods will put millions of lives at risk,” the groups said in a joint statement.