Israel and Saudi Arabia at Bab Al-Mandab.. The real causes of the war on Yemen.


During the recent days, information was leaked confirming that the Saudi military attaché in the moment he supervised the assassination of Yemeni President Ibrahim Al-Hamdi, in October 1977.

He slapped the martyr president in the face and said to him: “Oh Red Sea dog.” As it seems, President Hamdi’s decision to hold a conference in Taiz to discuss the security of the Red Sea and its implications, which was held 7 months before his assassination, with the participation of the state’s leaders of Sudan and Somalia, in addition to the leaders of the two parts of Yemen, As a result, the meeting brought together a group that protects the Red Sea region from greediness, and it gives the riparian states the right to exploit the wealth in it.

According to a source reviewed with a video that has not been published yet that includes a speech for President Hamdi, just two weeks before his assassination, the president called for the establishment of a military base for Arab countries to protect the security of the Red Sea, especially from Israeli ambitions that emerged in the seventies, where Yemen played a role in the October 1973 victory when closed Bab el-Mandab strait. This made Israel move to the area of ​​the South Red Sea under the pretext of securing the transportation of Israeli ships, to expand its activity in the region in addition to its activity with Ethiopia, which has a strategic relationship with it and constitutes a threat to the interests of the Arab countries, on top of which Yemen.

41 years after the assassination of Al-Hamdi .. Israel controls the Red Sea with his project

On Wednesday, December 12, 2018, the Kingdom of Saudi Arabia announced that it reached an agreement to establish a Red Sea entity with the aim of enhancing security, investment and development in the countries bordering the Red Sea.

The Saudi Ministry of Foreign Affairs said at the time that seven Arab countries had agreed, in the Kingdom, with the presence of Saudi King Salman bin Abdulaziz, on the Red Sea and Gulf of Aden entity, which included Saudi Arabia, Egypt, Sudan, Djibouti, Somalia, Jordan, and the Yemeni government loyal to Riyadh.

The ministry indicated that the entity aims to protect global trade and international shipping traffic, and will enhance security, investment and development for the countries of the basin, adding that “the Red Sea entity is an initiative by King Salman to achieve stability in the region.”

The declared objectives of this entity are nothing more than clichés by which Saudi Arabia identifies the hidden objectives of establishing the entity and tries to separate it from parallel measures that have been implemented since King Salman bin Abdulaziz took the throne of the Kingdom with the aim of completing the “Greater Middle East Project” that was set up by Israeli President Shimon Peres in 1996.

The researcher in the political geography of the Red Sea, Dr. Anis Al-Asbahi, believes that the Red Sea entity and the Gulf of Aden project is an Israeli project, although Israel is not among the countries that participated in the establishment of the entity publicly.

Al-Asbahi affirms in an interview with the Yemeni news that the entity’s announcement is a coronation to the great Middle East project announced by Peres in 1996 and requires the internationalization of the Red Sea and the imposition of control over strategic waterways.

In his new Middle East book, Peres suggests that peace must be found in the region through forming an entity that confront the Iranian threat,  pointing out on page 90 in his book that peace begins with forming of a new Middle East and this east must begin with the implementation of joint projects on the Red Sea.

“We can start at the point of the Red Sea,” he says. “The shores of the Red Sea have changed over time Egypt, Sudan and Eritrea are located on one side with Israel, Jordan and Saudi Arabia located on the other side and these countries share a common interest, it can be said that there are no longer reasons for the conflict, Ethiopia, after Mengistu and the newly independent Eritrea regime, wants to establish good relations with their neighbors, including Israel, while Egypt has already signed a peace agreement with Israel As for Jordan, Saudi Arabia and Yemen, want to secure freedom of navigation, fishing and aviation rights.

Peres coincides with Peres’ talk about the union between Arab countries with Israel in the face of Iran, the Saudi foreign minister’s talk repeatedly. Saudi Arabia is an ally of Israel against Iran, as for his talk about investment projects on the Red Sea; Saudi Arabia launched “Neum” investment project. It is a project in which Israel participates, as confirmed by Israeli, Arab and international reports. It aims to establish a city for investment in the northwestern region of the Kingdom. It is a region that spans three countries, and its borders extend to neighboring Jordan and Egypt.

Egypt conceded the islands of Tiran and Sanafir for the benefit of Saudi Arabia Kingdom, to be able to extend “Neum” to the Egyptian Sinai, in which the Saudi crown prince bought a land of an area estimated one thousand square kilometers.

Through purchasing Tiran and Sanafir, Saudi Arabia became part of Camp David agreement; this is what Moshe Yaalon, the former Israeli defense minister, mentioned during a press conference with military journalists

Haaretz newspaper mentioned him: “The Kingdom of Saudi Arabia has given written assurances of transit freedom in the Strait of Tiran.

The Saudi Arabia’s commitment document has been handed over to Israel, In line with what was agreed between Egypt and “Israel” in the 1979 peace agreement,

According to the agreement, the Straits of Tiran and Gulf of Aqaba are international waterways open to sailing and free flying.

This is in the north of the Red Sea, what about the south?

The Greater Middle East project lost its potential to be realized when Ansar Allah movement take over the rule in September 2014 from President Abd Rabbo Mansour Hadi government, which is loyal to Saudi Arabia and Washington. This necessitated forming an international coalition in order to return this government to power. 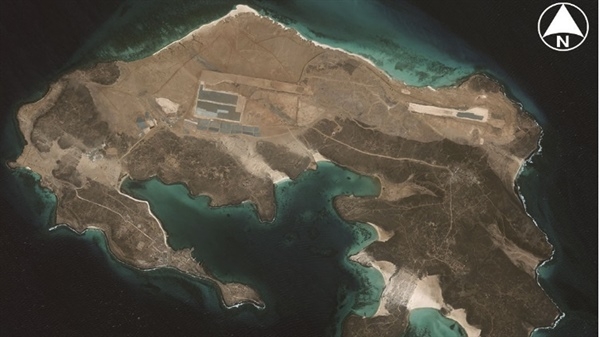 This is what Israeli Prime Minister Benjamin Netanyahu mentioned on the third day of the Saudi coalition’s operations in Yemen, where he claimed that Ansar Allah movement is linked to Iran and their control over Yemen is a threat to all of humanity.

Then he described as the “Iran-Lausanne-Yemen axis” is a very dangerous axis for all man kind we must stop it. ” Adding that the agreement is taking shape between the major countries and Iran

“It could be worse than what Israel initially imagined.”

He continued, “I just finished discussions with the Republican head of the US Senate, Senator McConnell, and I spoke with the Democrat leader, Senator Harry Reid,”

I have heard from both sides and they confirm the full bipartisan support for Israel, and this is extremely important.

In addition, Netanyahu added, “I also expressed before them our concern about the upcoming agreement with Iran …

Parallel to those meetings in Lausanne, Iran’s arms in the Middle East are waging a massive campaign to occupy Yemen, in an attempt to control the Strait of Bab Al-Mandab, which can affect global trade and the exportation of oil to the world. ”

The Saudi-led coalition, backed by Washington and Tel Aviv, began a systematic operation to control Yemeni ports and islands. Since March 2015,

Since March 2015, they managed to control most of Yemeni ports and islands. The participating forces in the alliance, led by Saudi Arabia and the United Arab Emirates, have deployed military forces in various Yemeni islands even though it is far from Houthis and they did not reach it. Recently made great sacrifices to control the port of Hodeida.

Beyond that, the UAE established a military base on the Yemeni Mayon Island in Bab al-Mandab and another on Socotra Island.

The primary objective of the Saudi war on Yemen was, as Dr. Anis Al-Asbahi believes, controlling the Yemeni ports and islands, due to its importance in controlling international shipping lines as well as a guarantee of Israel’s security in the region.

On July 10, 2018, Saudi Arabia announced the reconciliation between Ethiopia and Eritrea after 20 years of tension in their relations, under the auspices of its King Salman bin Abdulaziz.

This reconciliation would not have taken place, according to Dr. Anis Al-Asbahi, without a Saudi-Israeli role in bringing them closer together in order to complete the project of the countries bordering the Red Sea to achieve the Greater Middle East project and the Century deal project.

Return Of 20,000 Of Coalition-Recruits Is Message For The Remaining: Sana’a Intelligence